Adrenaline junkies, climbers, hikers, and even history buffs would enjoy this nearly-impossible-to-reach spot in the Monte Cristallo massif inside the National Partk of the Ampezzo Dolomites. An Italian World War I shelter was somehow built into the rock over two thousand meters above sea level—that’s over eight-thousand feet! The only way to get here is to challenge yourself on some of the hardest terrain to climb and hike, if you dare.

Even if you managed to get yourself up to it, the building is so old that it could fall at any moment, especially the doorway. It was built inside the massif and is made from brick walls on the outside and four wooden windows. It even has a slanted roof and shutters on the windows too. 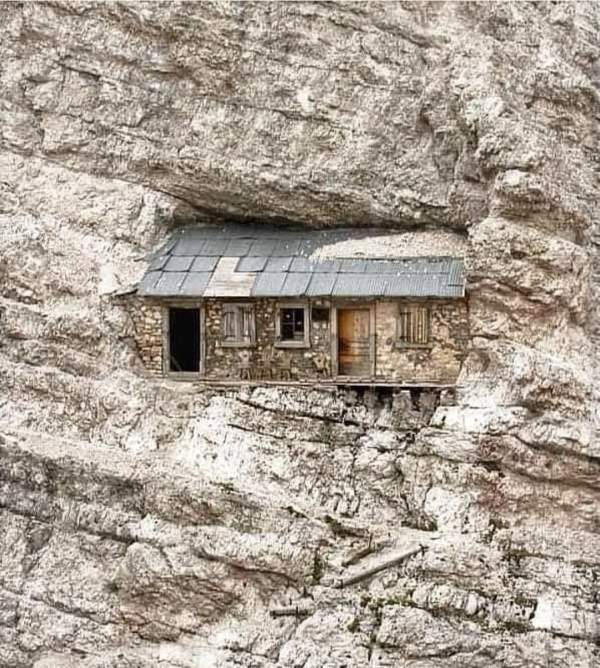 For a bit of history behind the building, no one knows for sure how it was constructed or why, but it’s thought to have been built by Italian soldiers during World War I during a time when the soldiers were in terrible winter conditions. For that reason, it was thought to have been constructed sometime during The White War—named for the wintery season at the time. During the war between Austria-Hungary and Italy, pack animals and their soldiers would carry supplies, including weapons, across the terrain out here, which meant they built tunnels, supply routes, and even shelters along the way. This shelter is though to be a remnant of one of them.

Even though we have no idea how it was made, we do know that soldiers used ropes ladders to reach harder spots, so it’s a miracle that not only they constructed this shelter but that it still survives today. So, it’s a must-see for history buffs, as well as adrenaline junkies, hikers, and climbers since this is one of the hardest spots to get to—and a spectacular bunker to see!

Things to do at Christmas In New York

One of the most prestigious events of the year is around the corner. Yes, we are talking about the colors and festivities of Christmas. T...

Christmas is the most important holiday of the year and not only from an economic or religious point of view, but also from an emotional ...