The climate crisis and rising fuel prices have caused particular concern in society, with governments looking for sustainable and practical solutions.

In this direction, the Green party in Germany presented an innovative project: A trans-European night train network, the Euro Night Sprinter, which will be powered by renewable energy sources and will consist of 40 international long-distance lines. It aims to connect more than 200 cities and towns across Europe by 2030, from Lisbon in the west to Moscow in the east and from Helsinki in the north to Malaga in the south. This would favor journeys of a few hours by train rather than by air, since aviation produces almost 14 percent of emissions.

Germany's Green party created a map based on current railway lines, clearly influenced by the aesthetic of the London Underground. 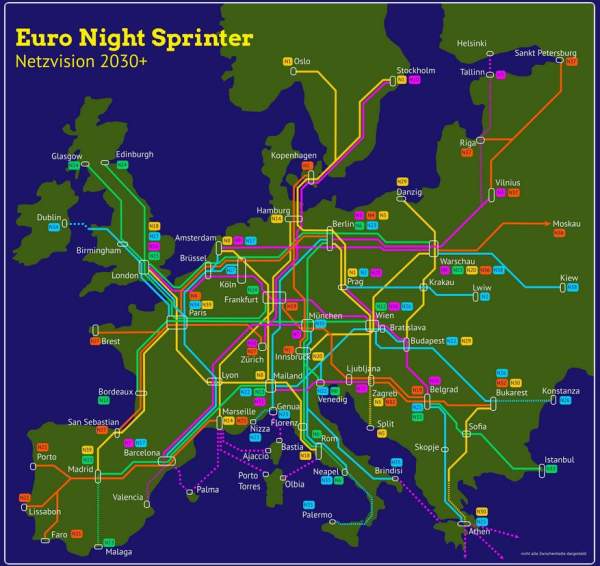 Map of the Green Party’s vision for a night train network. Credit: The German Green Party

To implement the project, the rail system will have to be supported by comfortable, quiet and fast trains that will run at a speed of 200 to 250 kilometers per hour, so that even the longest journeys will take 9 to 14 hours. Also, a booking platform common to all airlines should be created, with competitive prices to create a level playing field with air travel, to give an extra incentive to future passengers.

The idea is that passengers will prefer a beautiful, dreamy train journey at night, restful and comfortable that will cross beautiful landscapes, at prices competitive with air tickets. You will sleep during the travel and in the morning you will have found yourself at your final destination rested and ready for travel action.

In addition to the creative plan, the EU announced during the Connecting Europe Days 2022 that it aims to double the use of high-speed rail by 2030. To this end, the EU is carrying out several projects that will strengthen its rail network, including cross-border connections and connections to ports and airports.

The World's Most Powerful Passports in 2022

A passport is the most important thing to have when you decide to travel into other countries and one of the most powerful documents anyo...

The optimal road trip to see all the US national parks

What a better way to explore the beauty of a country than taking a road trip! At some point in your life you have probably thought about ...